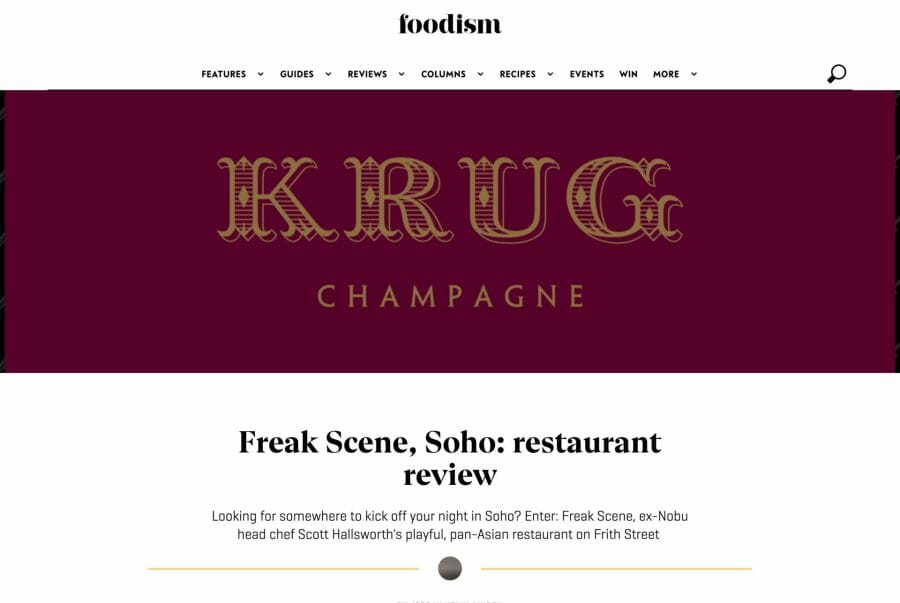 We’re not saying every meal should start with a round (or two) of shots, but at Freak Scene you shouldn’t be surprised if that’s the way your night goes if chef-owner Scott Hallsworth and his partner in crime Phar Shaweewan get involved. With a rocking soundtrack and Japanese game show Takeshi’s Castle on loop above the open kitchen, this Frith Street spot is a riot of colour with an experimental, grazing-style menu that riffs off modern pan-Asian flavours. It’s a far cry from the site’s previous occupants – Adam Simmonds’ fine-dining Test Kitchen and the Spanish tapas of Barrafina – but it suits Soho down to a T. And that’s not just the sake bombs talking.

Shots knocked back and swept away, it’s time for cocktails. Unsurprisingly, they’re far from straightforward serves, but that’s part of the fun. Dive into the Bonzai Kitten – made with sake, Russian Standard vodka and calpis, a milky, Japanese soft drink – for something slightly sour with a silky edge. Alternatively, freshen things up with Freak Scene’s take on a mojito: the gin- and elderflower liqueur-based Freaky Smash.

Grab a seat at the counter, slap down an order of the ‘Chopsticks’ – where deep-fried battered straws Jerusalem artichoke take on a satisfyingly meaty texture – and get ready to scoff something special. Then, when you’re ready to let go of the rich, tangy truffle-ponzu dip that comes with the artichoke, crunch your way through a round of the sweet and smoky black-cod tacos and see off some of the honey-hoisin grilled pork belly lettuce wraps. Here, mussels cosy up to charred pork belly while a cheeky hint (or so we think) of burger sauce creeps in under the sweet-chilli heat of the pineapple relish. Oh, and while you’re at it don’t forget to indulge that sweet tooth, too. The hot chocolate mousse is a must-order, and not just because it’s so airy it resembles a cross between a cloud of chocolate marshmallow and a window into heaven, but because the cold shock of accompanying ice cream will snap everything back into a sharper focus. After that, you’ll be ready to step back into the real world, where downing vodka-laced shots of peach schnapps with the restaurant’s head chef is just a story that happened to someone else…